So in my odd first day rambling review, I mentioned that I thought that The God Hater by Bill Myers was a bit timely. Here's the reason why: 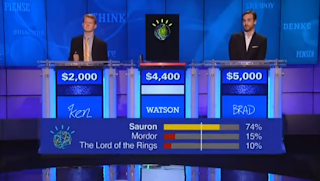 While the kind of artificial intelligence that Myers describes is probably a ways off yet, we just saw a computer trounce two Jeopardy champs on national TV. And while Watson got flummoxed a few times by the questions, it definitely was a step toward true artificial intelligence. Obviously Ken Jennings understood that as well: 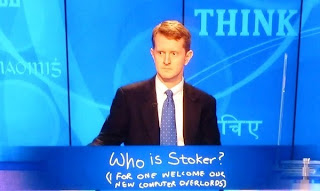 Most telling for me was the fact that as I was watching the episodes with my family, I kept referred to Watson as a "he," not an "it."

This was also kind of creepy since TIME magazine's cover story a few weeks ago covered the Singularity movement: 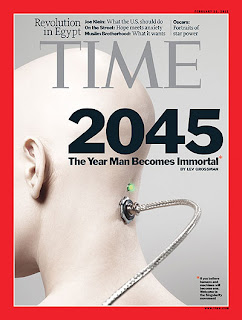 For those of you unfamiliar with the term, the Singularity Movement is the belief that soon and very soon, humanity will be able to create a computer system that will actually surpass the combined intelligence of every human everywhere. The date they're predicting? 2045. Yikes.

But let's be honest here, some of what Myers describes is already happening. I mean, I already have a virtual community of computerized people living on my hard drive, and I know I'm not the only one: 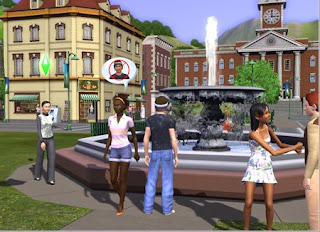 Now granted, the Sims aren't as sophisticated as Alpha and the rest of the crew in The God Hater, but again, it's a step in that direction. Very soon, we're going to need to start asking a difficult question: can a computer program be considered "alive" in the same way as a human being? Can a group of scientists build a soul?

If I'm honest, I'd have to say I don't know. For a while, I was firmly in the "no" camp. But the more I think about it, I wonder if it isn't possible. After all, human parents create beings with a soul all the time. Does soul-giving have to be biological? I'm guessing it would take a lot of work to create the first truly sentient computer program, probably as much as it takes for a human being to gestate and be born. Does the fact that scientists are involved and that each step of the process is deliberate and thought-out negate the soul-giving?

It's a hard question and, like I said, one we may have to tackle in the near future, along with others like it. For instance, if AI programs are truly "alive" and have souls, how does original sin factor in? Does it at all? Does what Christ did on the cross apply to them if it does?

Wow. Too much for one day. But I know I'm not the only one who'd like to know if machines can have souls. This guy would too: 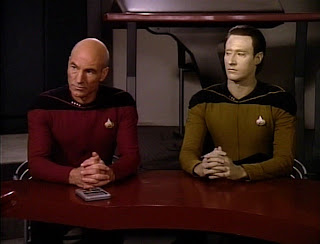 Very funny post! I enjoyed your humor. I really like what "what's his name" put about welcoming the computer overlords. Good to see he has a sense of humor about being creamed by a computer. I watched a little of one episode and found it a bit freaky.

Thoughtful posts, John. Sorry you had such an ordeal getting home, but glad to know you made it safely.

Thanks for your dedication to the tour. And for the record, I with my dial-up system prefer the oldie but goodie format over the video. Do you know how LONG that took for me to download? LOL

Seriously, thanks for expanding my theological musings connected with this book.

I like your three posts regarding the book, if nothing else because they were so varied and out of the normal for this tour. Thanks for the smiles. :)

Do computers have souls? Very interesting...

And by the way, I love Data! Sometimes I wish I could turn my emotions off like he can and just look at everything rationally and logically (I tell my husband that all the time and he laughs :P)

Sounds like someone is trying to avoid Chiron Beta Prime.

Great post! It took an aspect I think most others were missing. Asking questions is what speculative fiction is about, right?