Season in the Mist 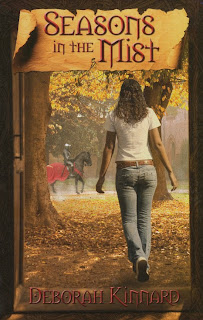 Okay, so I took a chance with this one. I just finished reading Seasons in the Mist by Deborah Kinnard.

It's basically the story of a young woman named Bethany Lindstrom, a graduate student from Chicago who flies to England as part of her studies. But instead of heading to Oxford, as she plans, she winds up taking a trip to Cornwall, where she stays in an ancient manor. While there, she stumbles into a portal that sends her back in time to 14th century England. There she finds herself caught up in some sort of political imbroglio and attracted to Baron Michael Veryan.

Okay, so here's the good stuff. Kinnard nailed the voice of 14th century England. At least, I think she did. As near as I can tell, no modern anachronisms sneak into the text (unless they come from Beth, which makes sense). It's very obvious that Kinnard did her research when it came to 14th century Cornwall and England. I got the feel that I was there.

That said, though, I don't think this book was for me. Sure, the time travel element is speculative fiction but I'm not sure that it's what you would call central to the plot. Sure, Beth is a classic "fish out of water," but thanks to her studies, she adapts quickly. In many ways, this is just a historical romance with some spec fic window dressing.

In the end, it was an okay diversion but I think I'll get off here (since this is listed as Book One of a series). Maybe this would be better for those who want more romance in their spec fic. But it's not for me.
Posted by John at 10:14 PM