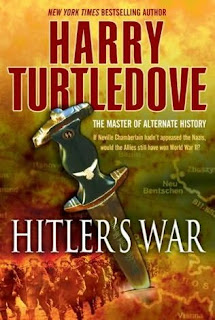 Don't get me wrong. I've loved his stuff in the past. I devoured his counterfactual history novels and simply adored what he did with the Confederates-as-Nazis series (I don't remember the name of the whole series; there were lots of smaller ones. American Empire?). He's also written some dynamite short stories that I've stumbled over in different anthologies. Yet the last few books of his I've read haven't wowed me.

So I thought I'd give Hitler's War a try. Like the cover blurb says, Turtledove was the master of alternate history and this seemed like an interesting concept. What if, instead of caving in to Hitler in 1938, Neville Chamberlain had refused to sign the Munich Accord? What if World War II started early?

In Turtledove's version of events, it doesn't really seem to have mattered that much. At least, I can't tell what the difference is. Oh, sure, Poland isn't conquered by Germany and instead sides with the Reich against the Soviets. And apparently some Spanish guy named Sanjurjo lives instead of dying in a fiery plane crash. But part of the problem with this book is that we don't have a broad view of the historical changes. All we see is battle after battle after battle. I suppose someone more familiar with the early stages of World War II could spot the changes better than me.

More problematic is Turtledove's character bloat. Rather than focus on one or two people, Turtledove slams together a cast of hundreds and sends the plot ricocheting through each of their viewpoints. I suppose this is helpful for us to keep track of the global scale of "the war that came early," but an unfortunate by-product is that we don't get to know any of the characters well. Simply put, there's no attachment point for the readers. It might have helped me if there were only two or three characters to follow. Granted, I would have lost the global view of the war, but I'm not sure said global view helped me all that much.

And I know I've said this before, but Turtledove seems to love repetitious phrases. There are certain turns of phrases that he overuses throughout the book. One of his pets, variations of "tell me I'm wrong," aren't as plentiful, but still creep up. Several characters pray to "a God they weren't sure they believed in anymore." That sort of thing. Rather than find fresh ways of saying something, we simply got characters repeating the same phrases in radically different situations.

I think this is intended to be the first book in a new series. I wish those who continue on luck, because this is where I get off. This war started early; my trip with Turtledove ends the same way.
Posted by John at 11:40 PM