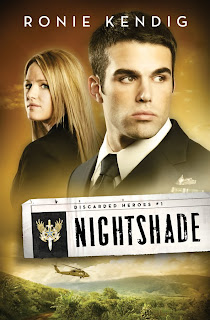 I've been looking forward to this one for a while. And boy howdy, Nightshade by Ronie Kendig did not disappoint.

Max Jacobs, a former Navy SEAL, has returned home from another deployment, only to find his life in shambles. He's suffering from PTSD and his temper is out of control. Worse, his wife Sydney serves him with divorce papers after an unfortunate incident.

Then a mysterious man approaches Max with a unique offer. He's putting together a special team, one tasked with carrying out the blackest of ops, a team called Nightshade. Things go well in their initial missions

But then they are called on to rescue a missionary family in the Philippines. Worse, a reporter is doing her best to pierce the veil of secrecy around Nightshade. Can Max lead his team through to success, keep their cover intact, and put the pieces of his life back together?

Like I said, I've been looking forward to this one for a while. I first heard a glimmer of it while listening to a recording from the ACFW Conference. Author John Olson used this book, yet to be published, as an example of writing plot burbs. And every now and then I heard more bits and pieces about the book and my anticipation would grow. So when this became available for pre-order, I put in mine right away.

Part of the reason I enjoyed this book so much is because Kendig doesn't get too bogged down in the action of the Nightshade missions. As a matter of fact, I was surprised at how those missions were largely absent. Yes, we caught glimmers of what they were doing (mostly at the end of the story as everything comes to a head). Instead, we were more focused on the Jacobs family, Max and Sydney, and how their lives were crumbling and how those lives could be rebuilt.

In some ways, this book reminds me a little of Rainbow Six by Tom Clancy in that both had a sort of elite commando unit. The key difference is that Clancy focused on the operational end where Kendig focused on the "backstage" stuff. The emotional impact of war, the grim realities of what our soldiers face. It's all excellent.

What has me smiling the most, though, is that on the back cover we have the promise of more books from Ronie Kendig in this series. Next up is Digitalis. I haven't put in my pre-order yet. But I may just have to.
Posted by John at 9:09 PM

Oh man. Oh man. WHEW! I can breathe. One thing I know about your reviews, John--they're always honest. So I am so glad to exhale loudly that you said "it's all excellent." I think I can go on with the rest of my life now. LOLOL Okay, I'm being a tad facetious but also serious. Thank you for such an great review. It means a lot, coming from you!