So to close out this month's in absentia blog tour, I thought I would relate the following story. I'm not sure what it has to do with anything, but it made me chuckle when it happened.

Late last month, I began reading Starlighter. I did so while my almost four year old son was taking a bath (I do that; he gets to play in the tub, I get to read a book). But that particular evening, he wasn't interested in playing. He seemed more interested in what I was reading. Just as a reminder, this is what he saw in my hands: 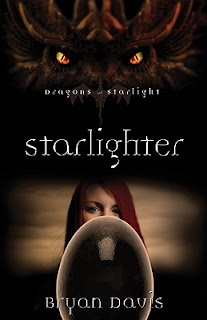 After studying it for a few moments, he asked, "What's that tree-branch thing that looks like it has eyes?"

"You mean this?" I asked, pointing to the dragon at the top of the book.

"But why does it have branches on its head?"

"Those aren't branches. Those are horns."

"Why does it have horns?"

Dead silence. Then, "What is that thing with the black eyes?"

I pointed to the girl. "You mean this? That's a girl peeking over a black egg."

He thought about this for a while and then asked, "Why is the dragon coming, Daddy?"

Well, I was only on page 12 at that point and hadn't actually seen any dragons yet, so I had no idea. So I decided to employ the Socratic method and ask him why the dragon was coming. He had no idea, so he suggested I look at the book's pictures and find out why.

I showed him the pages of the book, flipping through them to reveal that there were no pictures in this book. "It's a big-boy book. Maybe someday you can read a book like this."

He seemed very concerned that there were no pictures in it and asked me why there was a dragon on the book. I tried to explain that the pictures were put on this book to make people interested in reading the book. He then asked me what the book was about.

Again, page twelve, so I decided to once again reverse the question on him and asked him what the book was about.

"Why communion?" I asked.

"Because we went to church today." (And indeed, we did celebrate communion that morning)

I further questioned him about the book's plot based on his impressions from the cover art. And this is what he said:

"The dragon ripped a tree branch off a tree and put it in his pocket. Then he took the tree branch out of his pocket and put it back on the tree. And the girl looked in the branch and found a Mater whose wheels spin--because my Mater's wheels don't spin--to give to Abbie (a friend of his) at church."

And so it went. But I share this story for one other reason. At one point in our discussion, my son wanted to know if Bryan Davis could write a book about dragons with pictures and words that he can read. So there you go, Bryan. Your next book series?

Go see what the rest of the tourists have to say:

I hope you're nurturing his talent for back cover blurbs? ;)

FYI, Donita Paul has a dragon picture book coming out soon (August?). Check it out at her site. Looks well done, though the dragons aren't scary.

How sweet! Kids have such great imaginations.