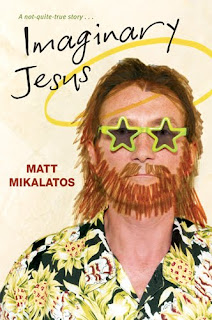 So just imagine. You're at your favorite communist restaurant, sitting at a table with Jesus. He's wearing his usual robes and listening to his iPod. That's when a fishy-smelling man walks in. He introduces himself as Pete, a fellow Christian.

And then he punches Jesus.

Jesus takes off running (can you blame him?). You're shocked, horrified really. Why would a Christian try to knock Jesus out of his sandals? Pete explains that Jesus isn't really Jesus, he's an imaginary Jesus. A fake. Pete wants you to go on a trip to find and meet the real Jesus. But first you have to track down that phony.

That's the opening of Matt Mikalatos's book, Imaginary Jesus, the "sort-of true story" where Matt goes on a strange journey. It takes him through time, both his own lifetime and two thousand years ago. He encounters a talking donkey theologian. He engages in a philosophical debate carried out via inner tuber race down a mountain. There's an army of fake Jesuses who are all desperate to be Matt's Jesus. And always one step ahead is Matt's Imaginary Jesus, avoiding capture. Avoiding identification.

If you're left scratching your head, wondering, "What kind of crazy book is this?" you've hit on what makes this book great. It is a crazy book. A weirdly, wonderfully bizarre story with a fantastic point (which I'll delve into a bit more tomorrow). Mikilatos does a great job unmasking many of the imaginary Jesuses who lurk in contemporary American Christianity. My personal favorite was 8-ball Jesus, whose name is pretty self-explanatory.

What's really great about this story is that, as off-the-wall as it is, there's still a truthful ring to it. It's easy to see the seams, so to speak, where Mikilatos sewed on the oddities to his own life's story. There was some raw emotions in there, but they were grounded and down to Earth, more so than the supposed backstory of The Shack. It resonated with me more, but that might be because I saw echoes of my own journey in it.

Now there were a few points where I disagreed with the theology of this book (I'm saving one of the "big ones" for Wednesday). But when you come right down to it, this is a great read and certain to get you laughing. Well, if not that, then definitely it'll give you a lot to think about. I've already recommended that my congregation check this book out. I suggest you do the same.

Go see what the other tourists have to say:

I haven't read The Shack, though my mom was quite enamored of it, which surprised me, considering all the book's theological problems I've read about / heard discussed.

I'm interested in reading more of your thoughts on Imaginary Jesus.

Great stuff as usual, John. I saw some similarities with The Shack as well, and while this book also fictionalizes a personal spiritual struggle, Matt's story seemed fresher and more honest to me despite (or perhaps because) of all the wackiness.

I didn't read the Shack until long after I had finished writing IJ, and when I did I was a little embarrassed at how many of the same themes and ideas that Paul and I covered. I thought everyone would read my book and say, "That guy ripped off the Shack and made it into a comedy!"

I think the kind of fiction is similar to The Shack, but I don't think Matt has any worry about people thinking this book is a rip-off. The use of humor is the big separator, but so is the theology.

And yes, I'm interested in what you thought about that, John.