So after a four or five month hiatus, I'm back with the CSFF Blog Tour and, I have to say, I've missed it. And this month, we're looking at Faery Rebels: Spell Hunter by R. J. Anderson. 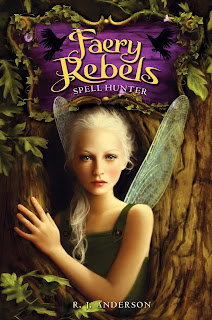 This is the story of a faery named Knife. Knife has always been a precocious faery, brave and daring. She lives in the Oak with about four dozen other faeries and life is not easy for any of them. They lost their magic decades ago. Their numbers are dwindling. They have all become self-centered and petty. Worse, a disease called the Silence is slowly killing them. They're locked in a fierce fight of survival and Knife is on the front lines when she is named the Queen's Hunter. It is her job to go out and . . . well, hunt, obviously. It's a dream come true for Knife because she can finally leave the confines of the Oak.

It's on one of these trips that she meets a human named Paul who lives in "the House." She can't quite figure him out. But she still strikes up an unusual friendship with him, going out to visit and even help him through some tough situations.

What she doesn't realize is that this new relationship could easily destroy both of them. She's suddenly embroiled in a much larger adventure, one that could change life in the Oak forever.

I'm actually surprised that I liked this one. I definitely did not go into this story expecting that (more on that tomorrow). But Anderson's prose is easy to read and quick to read as well. Her characters are interesting and the faery society she created is fascinating to explore. I thought that I would have to force myself to read this one, but the deeper I got into the story, the more I wanted to read it, even to the point that I stayed up late one night to finish it.

Anderson also crafted her story well enough that I couldn't predict what was going to happen. I thought I had things figured out in the early going, but it turned out that I fell for Anderson's misdirection. I won't go into details (spoilers and whatnot), but I was pleasantly surprised when everything was resolved and I understood the larger story.

It would appear that there's a sequel in the works (at least, according to what I saw on Amazon). I don't know if I'll try to get said sequel when it comes out, but I'll be tempted.

Make sure you go see what the other tourists have to say:

Welcome back, John! Yeah, this one surprised me too. I was steeling myself for "another kids' book" and was pleasantly surprised that the story went a little deeper.

heh heh I love reading that the men liked this book as well. I LOVED it.

I will for sure be getting the second book the minute it comes out.