CSFF Blog Tour: Curse of the Spider King Day One 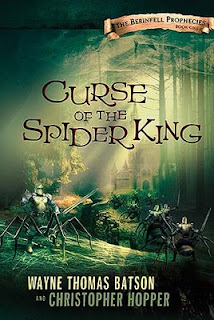 This month, we're talking about The Curse of the Spider King, the first book in The Berinfall Prophecies. This book is the combined effort of Wayne Thomas Batson and Christopher Hopper, two powerhouses of Christian speculative fiction. I don't believe I've ever read any of their stuff, so I was excited to read this one and see what they had to offer.

The book is basically the story of seven young men and women. Strange things are happening to them. New talents emerge that defy logic. Trusted elders (teachers, librarians, and so on) pass on handmade books that somewhat literally suck the readers into their tale. And dark forces mass to kill these seven because they share a common heritage that puts them all at risk. An ancient enemy wants to destroy them and has unleashed a small army into our world to prevent these nascent heroes and heroines from returning to their true home . . .

I should write back cover copy, right? Right?

Ahem. Yes, well . . . Like I said, I was really looking forward to reading this book since it would be the first time I read something by either Batson or Hopper. So both of them at the same time? Perfect.

On the plus side, this is certainly an exciting book. Lots of fantastical creatures, an epic war between the forces of good and evil that spills into our realm, plus some incredibly intriguing characters (Kat was by far my favorite). I don't have any doubt that a lot of people will read this book and the subsequent sequels and thoroughly enjoy them.

I enjoyed the book, it was a quick read. But in the end, I wound up feeling a bit unsatisfied. Part of it could probably be considered Monday morning quarterbacking (or would that be Monday morning editing? Post-publication rewriting? Nitpicky reading?). Keep in mind, the following is my grubby little opinion, so take it with a gigantic, boulder-sized grain of salt.

First of all, there were too many characters. Waaaaaay too many. There were seven heroes/heroines with backstories and abilities to discover. On top of that, you had their attendant helpers (at least two or three per main character). It resulted in a veritable forest of characters, so much so that by the end, I had lost track of some of them (a major problem at the very end).

This especially became a problem since all the heroes had very similar entries into the story. As in, they all followed the same basic pattern (something is strange, they get a book, they discover their ability, they're attacked, they learn the truth). The order may have varied a bit, but each part was there. And this happened six times.

Again, this is just my opinion, but it might have been better if they would have focused on two or, at most, three characters in this book. My vote would have been for Kat and Tommy. Let them be the main characters; relegate the other five to supporting cast. Then, with the next book, rotate them. Two more come forward, these two fade back. It would have cut down on the repetitive parts of the story.

The other perhaps picky part had to do with the history books given to the young men and ladies to reveal their true heritage. The writing voice of these supposed histories didn't feel right to me. The language seemed to modern, too story-like. You'd think a history, especially an ancient history, would sound a lot different than the rest of the book. For example, at one point, an ancient warrior from a different dimension thinks that his side doesn't have "any more cards to play." That phrase smacked me right between the eyes.

But there's a deeper issue at work with this book, but I'll discuss it tomorrow.

So if you've read the book, what do you think? Were there too many characters? Am I full of it? Go see what the other tourists have to say:

Hi, John! No you're not full of it. Certainly some valid points you've made here. Seven is a large number of characters to follow. Initially we had nine. lol But there's a reason for the madness. While Tommy and Kat will figure more prominently perhaps, it's important to us that this venture be a "group effort," that these diverse people, from all walks of life, have equal stake in the mission. It speaks to one of the larger themes of the series as a whole. Looking forward to hearing more from you tomorrow.

John, I'm not quite done with the book yet, but I don't find the 7 to be a problem yet. I wondered about the same thing, but I seem to be keeping them straight so far - except the names of Tommy, Jimmy, Johnny, etc. I'd have a little more variety to differentiate them, but perhaps I'm missing something.

Good to hear from you as always on the tour, and I'll be looking again tomorrow.

I found the character number to be a bit confusing, but it's not a big problem, just takes a bit of "growing into".

I'm on my second reading of the book. It's easier to keep track of them the second time through.

Thanks for your candid review (sometimes people hold back).

As Wayne said, it was going to be 9! (Yikes!). And it was a struggle even with the publisher to opt for the full 7, plus their Sentinels and Dreadnaughts. But in the end, we convinced them that our *mostly teen* audience has a strong appetite for characters and keeps up rather well. (Not implying your age at all!) ;)

I must say, though, that having two rotate to the forefront for each installment is a very cool idea, one reminiscent of rotating a single character to the forefront in a trilogy. Our only problem is we don't know how many books in this series we'll get to write, so it was all or nothing. But like the idea a lot!

Good points! Thanks for reviewing it!

Good point with the names, Jason. It was a bit hard to follow. I got thinking that Tommy was the Scottish kid, but that was Jimmy. But I was sure I remembered that Jimmy was the football kid, but when I looked back, that was Jett. So who was Johnny? Kid with the sister and the cave...

I'm not a big fan of more than two or three POV characters, unless it's a mystery/suspense, then I can deal. I prefer to stick with a few main characters and live the story through them. *shrugs*

My preference, too, Jill, but once I "got it" as far as who the kids were, then I was OK with the big number. But like Jason, I found the similarity of names a difficulty. Mentioned it in my review, part 2 today.

John — great review, and very honest. I too had my "editing" hat on in hopes of learning a few writing tricks.

As such, I ended up with a small pile of lint picked off, similar to your pile.

Overall, though, I must say that its a great book, and the YA market is going to love it.