Who Stole My Church? 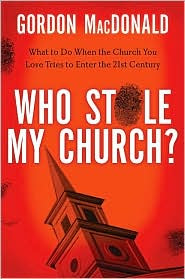 This past Sunday, one of my parishioners came up to me after the services. She said she knew I liked reading and she had a book for me. She handed me a copy of Who Stole My Church? by Gordon MacDonald. She said it really challenged her. I can see why.

MacDonald's book is a treatise on how individual congregations can best meet the needs of those around it under the extremely thin disguise of a story. There are characters and something of a plot, but it's mostly all a conceit for MacDonald to get his point across.

The plot, if it can be called such, is this: MacDonald places himself as the pastor of a fictional church, one that recently had something of a set-back. The leadership tried to pass a series of changes to the way the church did things, only to have some of the oldest and most faithful members push back. MacDonald, rather than rail on them, suggests they meet to discuss the changes and why he feels they're necessary. The title comes from the plaintive cry of one of those members at that first meeting.

If we're trying to judge this book as fiction, it falls flat. As a matter of fact, I'd even be tempted to say that this shouldn't be called a "novel" or a "story" or anything like it. It's more like a Platonic dialogue. The characters, while distinct, are foils for MacDonald. They eventually come around to enthusiastically see things his way. The only holdout is depicted as a reactionary and something of a jerk (more on why this bothers me in a bit).

In terms of nonfiction, this book gave me a lot to think about. Lutherans (especially my kind) are a stubborn bunch. There's an old joke that goes, "How many Lutherans does it take to change a lightbulb?" "CHANGE!?!?!" We tell that amongst ourselves because it's true.

But MacDonald makes a strong case that sometimes, change is not only necessary, it's healthy and good. Every congregation should take the time to reevaluate what they're doing at one time or another, if for no other reason than to make sure that everything is still working the way it should. That process may be painful, especially if people discover that something isn't working right, but then, it's sometimes necessary to go through "growing pains."

But there is a problem with the way MacDonald presented his argument. Since he did so through a story, he could simply have all the characters come to agree with him in the end. They all become "enlightened" enough about his new, better way of doing things that they all fall in line and become enthusiastic for the new ways. The only person who doesn't is depicted in a very harsh light afterwards, so much so that MacDonald insinuates that he's almost an abusive husband and not really a Christian.

That's unfortunate, because it leaves the impression that if you don't agree with MacDonald's analysis of how churches should adapt to the 21st century, you're somehow less of a Christian. I would strongly disagree with that assessment. It might have been better if some of his "discussion partners" had ended the journey unconvinced but willing to go along with it. Or better, if some of them made it clear that they still didn't like it, still thought he was wrong, but weren't going to leave the congregation. Simply put, MacDonald set himself up for everyone to pat him on the back for his keen insight.

Had he presented his argument in a standard, non-fiction sort of way, people could evaluate his ideas and take them or leave them. Now, with the fictional story format, a person who doesn't quite buy his arguments is left with the impression that perhaps the problem isn't with the ideas, it's with them and their faith. Not cool.