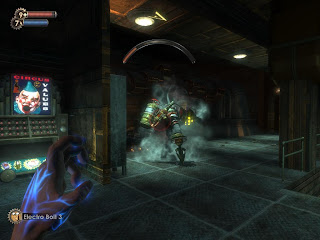 I just finished playing through Bioshock and I have to say, it was a fun ride.

For those unfamiliar with this game, the premise is this: you are on an airplane that crashes into the middle of the ocean. But luckily for you, there's a strange island with a lighthouse on it. You go into the lighthouse, only to discover a bathysphere that takes you to an undersea city called Rapture. Apparently a man named Andrew Ryan conceived of Rapture as a place where people could keep what they earned without giving any of it to the government, God, or the poor, where scientists could carry out research unfettered by the petty dictates of common ethics, and people could live in a utopia.

Needless to say, things didn't work out quite that way.

The Rapture you find yourself in is a devastated battleground. Roving bands of splicers, people who have fiddled with their genetic code using a substance called ADAM, wreak havoc and try to kill you. And through it all are lumbering giants called Big Daddies leading girls called Little Sisters through the deserted streets. You have allies. You have enemies. Your goal is to pick through the debris of Rapture and try to escape alive.

I've been hearing great things about this game ever since it came out. Games For Windows gave it high marks and I can see why. From what I understand, the game is somehow based on Ayn Rand's objectivism and is supposed to be a critique of it somehow. I have to admit, I didn't get that part. But that's okay.

In terms of story, the people who created Bioshock did a great job. Rapture is a crazy place to visit with a definite storyline behind what happened in this intended utopia. Plus the journey you go through is a harrowing one. There's a massive twist in the middle (I won't say what it is) that I kind of saw coming, but I got so many details wrong I was simply delighted when it happened. In some ways, it reminded me of Knights of the Old Republic. Storywise, that is.

My only complaint is that it was too easy on easy. Yes, I know, I'm a wimp and should have started on medium, but I wanted to get a feel for the controls and how everything worked, so I played it on easy. By the time I reached the end, I could drop Big Daddies with the greatest of ease and the final boss fight took all of about three minutes. To put it another way, I never died. Not once. Usually in a game like this, I'm used to failing at least a dozen times on the way to the end.

But that doesn't mean that I didn't enjoy myself. I did. And yes, I'll be playing it again on medium. There's another ending to the story I have to see yet and I want to see if the Big Daddies are harder to drop on medium. But it might be a while. I've got something else that will be occupying my time starting next Tuesday.