CSFF Blog Tour: The Shadow and Night Day One

This month we're looking at The Shadow and Night by Chris Walley. I have to admit, this one excited me for the simple fact that it's clearly a science fiction book. I'm not sure why people classify it as "fantasy." I mean, you've got terraforming, genetic engineering, and faster-than-light travel. I saw nothing that could even remotely be construed as an elf or other fantasy-based races.

But before we go into the stories themselves, we should talk about their foundation, part of which is post-millennialism. This is a form of eschatology that doesn't get talked about all that often.

For that very reason, I thought I'd do my civic duty by offering this, a millennial primer.

For starters, we'd better define our terminology. The "millennium" is the technical term for what's referred to in Revelation 20:

"And I saw an angel coming down out of heaven, having the key to the Abyss and holding in his hand a great chain. He seized the dragon, that ancient serpent, who is the devil, or Satan, and bound him for a thousand years. He threw him into the Abyss, and locked and sealed it over him, to keep him from deceiving the nations anymore until the thousand years were ended. After that, he must be set free for a short time.

"I saw thrones on which were seated those who had been given authority to judge. And I saw the souls of those who had been beheaded because of their testimony for Jesus and because of the word of God. They had not worshiped the beast or his image and had not received his mark on their foreheads or their hands. They came to life and reigned with Christ a thousand years." (Revelation 20:1-4, NIV)

I'm sure most of my readers are aware that there are about half a dozen different ways to interpret any passage out of Revelation, and that's certainly true of this passage as well. There are four basic "flavors" to millennialism, as illustrated by this chart: 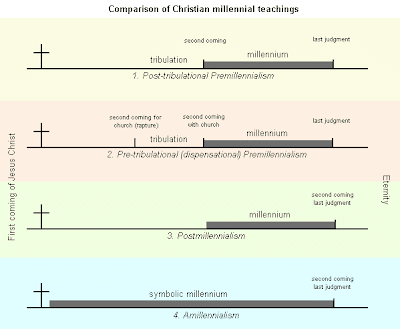 The first category is called post-tribulation premillennialism or is also known as "historic premillennialism." As you can see from the chart, those who hold this view believe that Christ's reign will be a literal thousand year reign that kicks off immediately after the tribulation.

For that reason I won't go into too much detail here. Suffice it to say, dispensational premillennialists believe that before the tribulation, the Christian Church will be raptured into heaven. The tribulation will kick off, overtaking unbelievers, the Jewish people, and anyone who converts to Christianity afterwards (including the aforementioned Jews). After seven years, Jesus will return a second time (or would it be a third time?) to set up his literal millennial kingdom.

But then, if you've read Left Behind and the subsequent books, you're familiar with this already.

This is the eschatology that's at the foundation of The Lamb Among the Stars, of which The Shadow and Night is the first two books. In this case, Walley obviously doesn't see the millennium as a literal thousand year reign, seeing as the Assembly has lasted a dozen times longer than that.

In the interest of fairness, I'll confess here and now that I'm an ardent (some might even say militant) amillennialist. I don't buy into either version of premillennialism and I think postmillenialism is too optimstic. But this isn't a critique of Walley using postmillennialism in his book.
Instead, I'm glad he did. Exploring a different theological viewpoint is always healthy. While I didn't agree with Walley on his eschatology, I certainly appreciated it and reading his stories helped me refine and hone my position a bit more.
So there you go. Millennialism. I don't know if anyone else will discuss that today. I won't bring it up tomorrow either. Well, probably not. Instead, I'll submit some reviews on the stories themselves. In the meantime, be sure to check out what other people are saying:
Brandon Barr
Jim Black
Justin Boyer
Grace Bridges
Jackie Castle
Carol Bruce Collett
Valerie Comer
CSFF Blog Tour
Gene Curtis
D. G. D. Davidson
Chris Deanne
Janey DeMeo
Jeff Draper
April Erwin
Marcus Goodyear
Rebecca Grabill
Jill Hart
Katie Hart
Michael Heald
Timothy Hicks
Christopher Hopper
Heather R. Hunt
Jason Joyner
Kait
Carol Keen
Mike Lynch
Margaret
Rachel Marks
Shannon McNear
Melissa Meeks
Rebecca LuElla Miller
Mirtika or Mir's Here
Pamela Morrisson
Eve Nielsen
John Ottinger
Deena Peterson
Rachelle
Steve Rice
Ashley Rutherford
Chawna Schroeder
James Somers
Rachelle Sperling
Donna Swanson
Steve Trower
Speculative Faith
Robert Treskillard
Jason Waguespac
Laura Williams
Timothy Wise
Oh, if you are interested in more information about eschatology, here's a helpful paper: The "End Times" -- A Study on Eschatology and Millennialism. This was put together by The Lutheran Church - Missouri Synod's Commission on Theology and Church Relations. Very good stuff, if a bit academic.
Posted by John at 8:40 AM

Wheee! John, I love your reviews, and the slightly different slant you always put on things!

Thanks for the analysis. In the paper that came with my copy of the book, Walley mentions that he used the millenial position he did becasue it worked well with his story. I'm not actually sure which eschatology he subscribes to. From what I understand, he just saw this position as conducive to writing science fiction, and so used it.

HA! I'm so glad for the lesson, particularly the chart. I always get all those lennialism-smisms mixed up. My memories from the one semester at a Bible college are dim, at best. And, as a Reformed girl, I tend to ignore the whole debate whenever possible.

Steve Rice also mentioned the theological slant, John, and concluded much the same as you did--that it's nice to see something different.

So, Chris is currently attending a Baptist church. What might this suggest about his personal millenial position? ;-)

Thanks for the refresher course; its been a lot of years since my Bible School days and that required course. My views? Plenty of evidence every direction, and what I personally believe doesn't automatically make it right. So my decision is to be ready, to invite those I know to be ready, and let God play it out as he wills! Yeah, I know it fascinates some folks, but me? Not so much.

Still, as I read the novel, I was thinking...isn't a millenium a thousand years, kind of by definition? So I do appreciate your post!

Wow, so much clearer now! Hanna was trying to explain this all to me the other day, and I did the phone version of smiling and nodding. The pictures were very helpful.

I suppose I've always subscribed to the second because that's what I was taught. But I'm learning as I grow older that these things don't really matter. My salvation isn't hinged on Christ's second coming, but his first.

I'm looking forward to what you have to say about the book!

Wow, thanks! This was very helpful to the discusions going on right now!

I asked a question here about sin. I'd love to hear your thoughts!

Well done and well said. Pretty thorough from this pastor's point of view. Thought Walley indeed do a good job in crafting his story with the theological stance he decided would work best. Great post!