Marcher Lord Select Round One 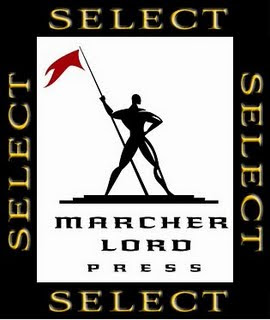 This is in lieu of my usual "Wordcount Wednesday" post, simply because I haven't been engaged in that much writing activity lately. I did look over a few chapters for a friend of mine, but that's about it. But yesterday I spent some time sifting through the entries for Marcher Lord Select. For those of you unfamiliar with what this is, I direct your attention to a post I made a few weeks back. The up-shot is that Marcher Lord Press, an up-and-coming Christian publishing house and the only to deal exclusively in Christian speculative fiction, is holding two different contests. The first is the "Main" contest. The winner of said contest will have his or her book published in the spring of 2010. The other contest, the "Premise" contest, will have three winners whose manuscripts will receive priority consideration by the publisher of Marcher Lord Press.

Since voting in the first round starts on Friday, I thought I'd share my short list of the entries I'll be voting for.

In the main contest, you must vote for anywhere from three (3) to twenty (20) entries out of the 36 entries. In this first round, judges have been provided the book's name, genre, wordcount, 20 word premise, back cover copy, and synopsis, so there was a lot of material to read. But like I said, I spent some time with it yesterday and came up with this short list of nine that I'll most likely vote for:

I didn't list any of the extra material provided to judges simply because you should really go and look at it for yourself. I mean, how hard is it to click on over to the Anomaly forum, sign up for a free account, and peruse the material for yourself?

Anyway, after looking through the entries and my short list, I've noticed that I'm gravitating towards sci-fi. Maybe that's because it's what I tend to write. Maybe it's because there's so little genuine Christian sci-fi out there. It's hard to say.

On to the Premise Contest. In this case, judges have been given the title, the genre, the wordcount, and only the 20-word premise. Once again, judges must vote for three (3) entries and up to twenty five (25) out of the 49 entries. This is a much quicker read and I came up with a short list of seven that I plan to vote for:

Those are the entries that grabbed my attention and held it.

So why am I sharing this here? Well, once again, I'm asking for your help. I have an entry in each of the contests (The Last Expedition in the Main Contest and Numb in the Premise Contest) and I'd love it if you would vote for them. You don't have to. I obviously can't force you to. If you go through the entries and find ones that you like better, vote for them instead! But please do go over to the Anomaly and join the fun. Remember, voting starts on Friday and goes through Sunday. You have to vote for at least three entries in each of the contests.

And once you have, come on back here and let me know what you think of my lists. Agree? Disagree? Are there entries I should reconsider?
Posted by John at 2:08 PM