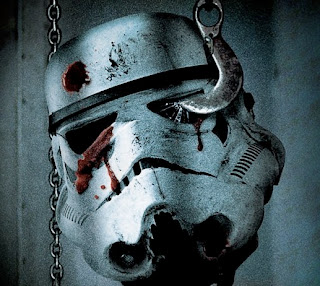 So earlier today I was in the Mall of America's Barnes & Noble and I saw a new Star Wars novel, entitled Death Troopers. I scanned the back cover copy and realized what I was holding. Let's see here. A small group of survivors from a shuttle. Some sort of sickness that causes . . . dead Imperial troops to rise from their . . .

Okay, I'm not totally into the whole zombie thing. I don't know why it's not my thing, but it just isn't. So maybe I'm not the best judge of this. But really? Stormtrooper zombies? Really?

Perhaps the entire zombie fad has jumped an enormous undead shark. Time will tell.
Posted by John at 8:50 PM

I think the zombie trend still has some legs yet, and will for some time to come. Hollywood thrives on giving audiences a target for their movie-going aggression, a boogyman that it will always be OK for the on-screen hero to blow away while they cheer. As it's no longer acceptable to use any visible ethnic group (unless you count British or Eastern European as visible ethnic groups and not just accents), we've adopted the zombies as our cultural whipping boy. Audiences want directors like Michael Bay to have something to blow up or kill with hatchets, and nobody can sue for undead discrimination.