The Fire in Fiction 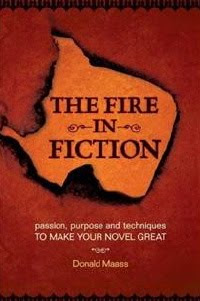 Yet another book I purchased at the ACFW National Conference back in September. Actually, the last I purchased (although I have three freebies I have to read yet). It's The Fire in Fiction by Donald Maass.

As a result, he's also seen a sort of blight that creeps into fiction. He describes it as passion-less writing that often inflicts writers, both beginners and those who are approaching the middle of their career. This book is designed to help writers at every level to infuse their books with fire so they can't be put down and so they'll linger with the readers long after they're done.

For the most part, Maass delivers. He touches on a number of subjects, such as maintaining tension on every page, creating memorable characters that do more than just pop off the page, how to infuse books with humor, how to make impactful action scenes, and so on. To help him illustrate what he means, he brings in examples from somewhere around a hundred contemporary novels from every genre.

In some ways, those examples are the book's downfall. Toward the end, it got to be too much. Every little section had at least two lengthy excerpts that kind of dulled my senses. Especially toward the end, I felt as if Maass was just showing us the good example and then saying, "Cool, huh?" without much instruction or explanation of what works so well and how an author can recreate the effect.

Not that I'm complaining. I'm actually planning on going through the book again and making a list of "gotta reads" because those sections did catch my attention.

And it's not all bad. There are exercises at the end of each chapter that relate to each point. I picked up some tips and ideas that I'll be applying to future books. So it's definitely worth a read.
Posted by John at 7:43 PM

I'm a daughter of Missouri Synod Lutherans too. From the Mohawk Valley, N.Y. Settled in 1710 by Lutherans from the Palatine region of Germany. I just ran into this (again): "Pray--and let God do the worrying." M.L.
I'd become a 'follower' if you had the follower gadget thingy up. (JUST NOW had a thought:wouldn't it be cool to be a blog follower of Jesus?!) Wonder how many readers He'd get? Might be a way to get the Word out. I also think He'd get a lot of controversial remarks--but nothing Scripture can't handle.
Have a blessed Christmas and joyful new year. Pat I. p.s. I'm on the loop too.