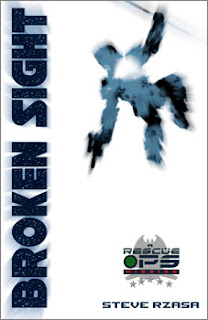 The book is a continuation of Rzasa's earlier books with Marcher Lord. In this world, religion had been pretty much outlawed. More specifically, it had been illegal to own the printed word (e-books were perfectly fine, because the government could monitor and censor the contents). But then, in the previous books, that situation changed. Want books? Get them! Want to publicly practice your religion? Go for it!

This is the situation facing Lieutenant Commander Brian Gaudette, the skipper of the Rescue Ops ship Weskeag. He's got a crew of Christians, Muslims, agnostics, and former sympathizers of Kesek, the fallen and disgraced secret police of the Realm, all mixed in one ship. That's a problem, because he finds himself heading out to answer a distress call, one that's fraught with danger.

Because Kesek hasn't disappeared. Not even close. And this mission could easily kill them all.

I checked my reviews from the previous books. Apparently I was a bit cool toward the second. That's not the case here at all. I loved this book. Once again, Rzasa's story world simply shone. You can tell he did a lot of work figuring out the "physics" of interstellar travel.

I loved the characters, the adventure, all of it. The only thing that threw me even a little was the sheer amount of foreign phraseology peppered throughout the book. I mean, it added to the verisimilitude, but there were a few times where I was scratching my head.

But overall, this was a great book, and I'm hoping that it won't be the last time we see Rescue Ops in action!
Posted by John at 10:58 PM