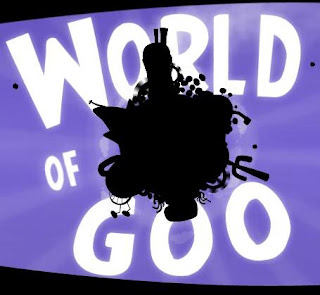 Back around Black Friday, the good folks at Steam were having a series of incredible sales. One such sale was a bundle of independent games for life $5. One of the games in said bundle was World of Goo by 2D Boy. I've just finished (most) of this ridiculously addicting ridiculous game and I know I'll be revisiting it soon.

The premise is simple: there is living goo balls and you have to build structures to solve puzzles. Usually these puzzles involve building a lattice-structure to a pipe that will suck up the loose goo balls that skitter along the lattice. But many of these puzzles are anything but simple. You have to do some out-of-the-box thinking to figure out how to build bridges, towers, or dangling chains of . . . well, I think it's supposed to be spit to get to your goal.

The game itself is short, just five quick chapters, but like I said, I know I'll be back to replay the levels. Part of this is to try for the "OCD" badges, namely to finish the levels while achieving a difficult feat (i.e. rescuing so many extra goo balls, completing it in so many moves or within so much time). Plus there's also the tower building mini-game. You can use goo balls that you've rescued to build a tower. Supposedly there's a meta-game that you can eventually reach. I haven't gotten close yet, but I'll keep trying.

If you're interested in trying it out, you can purchase it via Steam here. Trust me, it's worth every penny.
Posted by John at 4:41 PM