Okay, so I feel like I'm shirking my duties a little. I hate to say it, but I think this is going to be my only post for this tour. Yesterday evening, I came home from the ACFW National Conference in Denver and boy, are my arms tired. Wait. I think I screwed up that joke.

But seriously, folks, I am wiped out. Mentally, emotionally, physically, and even a little spiritually. Lots of good stuff, but that's another blog post for another time. Right now, I should be discussing The Vanishing Sculptor by Donita K. Paul. 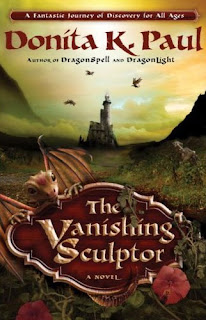 We're back in the familiar world of the DragonKeeper series, only this time, we're half-way around the world. A young emerlindian named Tipper is faced with a serious problem. Her father, the famous sculptor Verrin Schope, disappeared years ago, leaving Tipper to fend for herself and care for her mother, a woman who is just a bit eccentric. But then, two strangers pop into her life (although they aren't strangers to fans of Paul's work), taking her on an adventure to find three of her father's missing statues so that not only can her father come home, but the whole world can be saved as well.

I really enjoyed this book. Those of you who hang around The Least Read Blog know that I was a little hard on Donita the last time I reviewed one of her books, so I was a little apprehensive about reading this one. But I really had fun with it. Her characters were fun and engaging, full of life. I also enjoyed learning a bit more about Paladin (again, those who have seen my rambling musings know that Paladin's identity has confused me in the past), namely about who he is and where he came from. And like I said, the two "strangers" are anything but to fans of Donita's previous books.

There are two "negatives" that I noticed. Well, one's not a negative necessarily, maybe more a word of caution. Like I said, we once again drop into the world of the Dragon Keepers, and so we have a bunch of minor dragons flying about. I had no problem understanding who the dragons were and what abilities they had. But I wondered if a new reader would grasp it as easily. I seem to recall more explanation in the previous books about that sort of thing. Not a bad thing, necessarily. A reader would probably be able to figure it out, but it was something I wondered. If you were someone who read this book and hadn't read Donita's previous books, leave a comment and let me know what you think.

The "negative" that I have is a minor gripe. The final battle of the book seemed hastily set up. It was great and I loved the bad guy's villainous plot, but a few hints about it earlier in the book might have made it work a little bit better. I seem to remember thinking, "Oh, really? Well, I guess if you say so..."

But really, those are minor things. I really loved this book! It was a lot of fun and I think a lot of people will get a great deal of joy from it!

And Donita ... once again, congratulations on your "Mentor of the Year" win at ACFW this year!

I enjoyed this too, and as a first-time Paul reader, I didn't have a hard time figuring out the minor dragons. (They reminded me a lot of the dragons in Anne McCaffrey's Dragonsong Trilogy, so it felt like dragons just "should" be like that.)

Also just home from a conference, and exhausted beyond belief. But I wrote all my posts for this tour two weeks ago :).

I'm not a first-time reader, but my daughter is. This is the first Dragonkeeper book that I've read to her. I think that the minor dragons kind of slipped in under her radar. She finds them fun, but the character she loves best and roots for is Beccaroon. I don't think she would care if there were no dragons at all in the story, as long as Beccaroon was still in it.

Which is as it should be, as he is a major character.

She's all worried and upset about him right now (we're reading one chapter at time). We've just gotten to the part where... I don't want to spoil the story for anyone else! Lol.

LOL! Krysti, Beccaroon was the pivotal character for this book. He popped into my head and I just had to know more about him.

Rachel Star, I'm glad you didn't get thrown for a loop. John, it was great to see you in Denver. And in your post, you needed to say, I flew home and my arms are tired.
I'm glad you didn't have as much trouble approving of The Vanquishing Sculptor. (gentle poke in the ribs)
Truly, I find that hardcore fantasy lovers king of look askew at my tales. That's perfectly all right. I look askew at some of the classics, because I find them too gorey or too worldly. Oh well, God is gracious in providing more than one type of fantasy writer so that more fantasy readers can be satisfied.

Mrs, Paul, I can't help feeling that if SOMEONE doesn't look askew at your stories, you're probably not writing anything original enough to bother about. I found Vanishing Sculptor reminiscent of many of the fantasy stories I read growing up, but original for all that.

Nice post with some interesting thoughts. Too bad you're not posting tomorrow! :) I loved the humor in VS. I read the 5 DK books, so I can't comment about that. But a wonderful post!

Man, I just realized I should have asked you all to promote the library contest we are running. You could win a box of WaterBrook books or a visit from me to your library (public or school.) Check out the front page of my website. www.donitakpaul.com.