So here we go, gripe #1 about The Enclave by Karen Hancock. But before I dig into it, allow me to post the following: 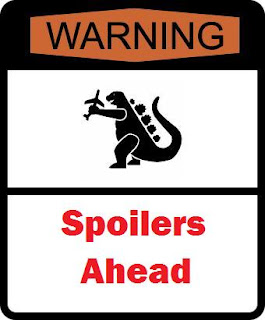 So if you want to keep the ending of the book a secret, you'd better stop reading now.

Like I said yesterday, part of the plot centers around a set of ancient sarcophagi. Director Swain, the head of the Kendall-Jakes Institute, believes that these large pods hold the secret to immortality. Of course, that's not what the pods contain. Instead ... are you ready for it? ... they contain sleeping Nephilim, the boogie men of Genesis 6. I suspected that's where the story was going, but when I got to where this is revealed for sure, I rolled my eyes and said, "Not again."

To be frank, I'm getting sick of the Nephilim. It seems like Christian speculative fiction always comes back to the Fallen Ones of the antedeluvian world. Quite frankly, I'm getting sick of it. I can think of at least three books that center around the Nephilim and both of them were lousy. The Enclave wasn't as bad as them, but I'm not letting it off the hook.

Part of the reason why I have such problems with the Nephilim is because I disagree with their traditional origin story. Most people believe that they're the product of angelic and human sexual unions. The proof text that gets trotted out for that is Genesis 6:2 and then the proponents for this view trot out a bunch of pseudopigraphical texts from intertestamental times, none of which are considered canonical (although I did see some convoluted logical gymnastics once to bootstrap one of these books; it failed to persuade).

What it comes down to for me is that Genesis 6 in no way says that the Nephilim are the children of the sons of God mating with the daughters of men. I don't even think that "sons of God" in this case does refer to angels. My personal read on this story is that the descendants of Seth (the "sons of God") interbred with the descendants of Cain (the "daughters of men"). If you look at the genealogical information in Genesis 4 & 5, we see the family trees of both Cain and Seth. In Cain's tree, the seventh generation is Lamech, the guy who boasts to his two wives that he killed a man for looking at him funny (that's a loose paraphrase). In Seth's family tree, the seventh generation is Enoch, the righteous man who walked with God and was no more because the Lord took him. As the old cliche goes, "the apple doesn't fall far from the tree." Seth's descendants were more upright than Cain's. The union of the two branches of humanity resulted in the bad dragging down the good.

My other major problem with the portrayal of the Nephilim in The Enclave is how fantastical they are. They have laser beam eyes, they can set off electromagnetic pulses. And Hancock at one point details how there were three castes of Nephilim. I don't remember what they were at this point, but I do remember scratching my head and wondering, "Where did she come up with that?" I'm all for dancing on the end of tree branches when it comes to speculative fiction. Some of this book was too much of a flying leap for me.

So what did you think? Are the Nephilim a dead horse that we should stop whipping? Or am I just letting my theological convictions get in the way?

And if you don't feel like telling me off, you can submit your name for the drawing. Even those of you who entered yesterday, feel free to enter again.

Go check out what the other tourists have to say:

I always enjoy reading your blog on these tours. The monsters were a little problematical for me as well. There's the one spot you mention where we get a glimpse of an alien society, caste system, etc, then when they finally emerge, they're little more than ravenous brutes--with laser beams. Okay, it had been a long time since their last meal, but I still felt let down. The unspoken reference to David and Goliath, with a vulnerable spot on the forehead, bullets standing in for rocks, and a decapitation to finish the job was kind of cool, though.

As for the whole issue of the Nephilim, yeah, it's getting hard to find a fresh take on that, and I'm more inclined to your interpretation of that passage, anyhow. Christian sci-fi writers have a tough time of it--any speculation that involves life on other planets or an non-tribulation future beyond five years out generally gets a lot of hostile feedback, so they keep falling back on the old standbys.

Obviously I disagree with your interpretation of the Genesis six passage, but thanks for taking the time to read The Enclave and then write out your thoughts about it. I appreciate seeing the different viewpoints.

In case you missed it, Karen posted her thoughts about the Nephilim on her blog today.

John, I have a slightly different take from yours. Since we don't know how long Adam and Eve lived in the garden before they sinned, and since they were commanded to be fruitful and multiply, why wouldn't they have had other children, possibly those referred to as the sons of God (because they were in the likeness of God)?

After the fall, clearly, those children were in Adam's likeness and would be the daughters of men.

If this were true, the sons of God would not have a sin nature, but their own sinful acts would still bring about their deaths.

I find the idea intriguing because it suggests that Man before the fall may have been far more physically endowed than we generally imagine.

But am I Nephilim weary? Not really. I mean, you said this is the third book about the Nephilim. How many books about dragons are we willing to tolerate? Or pirates? Or vampires?

I don't think there's a limit where we can say, That's it. No more books with such and such. As far as I'm concerned, it's all in the execution.

I love the Nephilim verses in scripture precisely because they invite so much speculation -- and force us to admit there's a lot about history we don't know. A lot about ourselves we don't know. I like your theory, though -- it's a new one to me, and it makes some sense, though I'm inclined to lean more toward Karen's interpretation.

If you don't mind entering me for the book again: thomson.rachel AT gmail.com.

John, Your reviews always bring up lots of questions to ponder. Your Enclave review was no exception. Thanks for some interseting thoughts on the book.

John,
As always, interesting. I happen to agree with the thought about all the pirate/dragon/*insert new hot type here*. There is nothing new under the sun - but it depends on how interesting you make it. Perhaps The Enclave suffers because other books dealt w/the Nephilim poorly.

I agree with you in the sense that the ending got congested with so many elements, so I think some details got rushed out without thorough enough building up for me. I can see your point, and this tour is so fun to see the different perspectives. I've got my review up, so I'd be interested in your thoughts.

Wait, did I read that right? This novel has nephilim who shoot laser beams out of their eyes? Clearly this book is concocted of pure Awesome Sauce. Please tell me they also do Kung fu. That would make the awesomeness almost too much to bear.

All right, since everyone else is weighing in on the Genesis 6.1 question, I'll throw in mine: the passage is the Genesis author's explanation for all those legends of half-god heroes; the "sons of God" are gods, and the nephilim are "the heroes of old, the men of renown." The passage is a means of making space for all the mythological stories with which the original readers would have been familiar.

The half angel/half human idea comes from The Book of Enoch, which stands at the end of a lot of mythological development, and which informed the opinions of early Church Fathers such as St. Justin Martyr. The view espoused here by the blogmaster is the view of the later Church Fathers, who used it to remove the passage's theological difficulties.