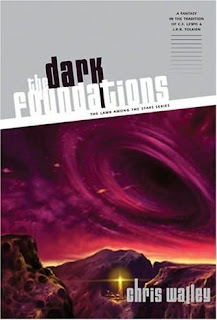 Earlier this year, as part of the Christian Science Fiction and Fantasy blog tour, I reviewed The Shadow and Night by Chris Walley. In my review, I said that I was actually rooting for evil to show up because the first half of the book proceeded so slowly.

Well, I don't have that complaint for The Dark Foundations, the second book in the series. It was an action packed tale from beginning to end.

The book picks up where the first left off. The people of Farholme celebrate after their victory at Fallembet Lake. But they can't rest on their laurels. The evil Dominion now knows of their existence and Lord-Emperor Nezhuala is bound and determined to take on the Assmebly, for both personal and political reasons.

Merral D'Avanos, the hero of Fallembet Lake, is placed in charge of Farholme's brand new military, but he finds he doesn't have an easy task. The society of Farholme is splintering under the effects of sin, creating situations D'Avanos has never experienced. Can he keep things together long enough to defend his home from the invasion he knows is coming?

I loved reading this book. My previous complaint about a slow pace no longer apply. From beginning to end, this was a great read. It was interesting to watch Farholme's society fall apart as more and more sin entered the picture. Walley's battle scenes were also well crafted and exciting. While there were two deus ex machina moments, they were organic to the story and worked out well.

My only complaint about the book is its marketing. On the cover, this is called "A fantasy in the tradition of C.S. Lewis & J.R.R. Tolkien." I take issue with that. This isn't fantasy. It's sci-fi. I mean, this is set in the future, approximately 13,000 AD. There are spaceships. There are artificial lifeforms. They talk about terrforming planets. I just can't figure out why they would classify this as "fantasy," aside from a few fantastical creatures like the Envoy and the baziliarch.

I suspect that the publisher (Tyndale) classifies this as a fantasy because in the Christian world, fantasy has been selling a bit better while sci-fi hasn't. It seems like a dodge and one that I'm not entirely pleased with.

But the story makes it worth it. More people should read Walley's works. I know I'm certainly looking forward to reading The Infinite Day. It might be a while; I've got a stack of six books to read right now and five more are on the way. But when I get through that, you know I'll be looking forward to seeing how this epic story concludes!

Hi this is Chris Walley here.

Thanks for your kind comments;I'm sure you will enjoy the Infinite Day. I do sympathise about the start of Shadow and Night but then Lord of the Rings starts slowly too. As for it being strictly science fiction well perhaps you should reserve judgement until Book 3. But the division between fantasy and science fiction is very arbitrary.

By the way I was told about your blog by the excellent Google Alert
system.