Settling Accounts: Drive to the East 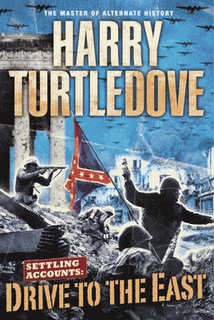 Just last night, I finished reading Settling Accounts: Drive to the East by Harry Turtledove. Turtledove is the master of counterfactual historical fiction. In other words, Turtledove takes history, changes something about it, and then susses out how that might have made things different.

Drive to the East is the latest in a long series of books that Turtledove wrote along this counterfactual line: what if the Confederate States of America won the Civil War and became their own country? He started this series with How Few Remain (a book that I haven't read). I started reading when the series took up World War I. Turtledove reckoned that the South would be allied with Britain and France while the North would ally itself with the Kaiser in Germany.

Since I started reading this book, the North has won World War I, subjecting the Confederates to a crushing set of conditions for peace. They've also wrested Canada away from British control and occupied it. But what's truly interesting is what happened in the South. Embittered by the South's defeat in the Great War, a man named Jake Featherston wrote a scathing book in which he blamed the big-wigs in Richmond for the loss as well as the African American people (not the word used in any of these books) who rebelled against the CSA as well. Jake eventually joins a new political party, the Freedom Party, which eventually takes over the country with Jake as its president.

Yes, that's right, in this alternate timeline, the Nazis rise in the southern United States and then start World War II with the North.

When Drive to the East picks up, the offensive of the CSA had smashed through US lines, driving up through Ohio to Lake Erie, dividing the US in half. Now they're threatening to march east, eventually destroying Pittsburg. The USA has to counter that threat and quickly or else they'll lose the war.

The plot is a lot more complicated than that, of course. One thing about this series is that Turtledove slathers on the characters. I wouldn't say it's a cast of thousands, but it's pretty darn close! In some ways, it's understandable why he does that: you need that many people to keep up with all the action that takes place in this alternate time-line. You need someone to describe the war in the Pacific and Atlantic; you need people to describe the inner-workings of both the USA and CSA's governments. You need the perspective of the African American people who are rounded up and taken to concentration camps for "population reduction". The problem is, Turtledove piles on so many people that it's a little tricky to keep up with them all.

There were two other things that bothered me as I read this book. First of all, Turtledove is extremely repetitive in his writing. He kept using the same phrases over and over and over, often using them, almost word for word every other page. Worse, if one character had a massive revelation about something, you could almost guarantee that at least three others would have the exact same revelation within a dozen pages and that Turtledove would almost repeat it word for word.

The other thing that bothered me is that Turtledove seems to assume that his readers have very short memories. Perhaps its because he loads up his story with so many characters. It seemed like he had to expound on his characters' backstories every other time we encountered them. At the beginning of the book, that's helpful. It had been a while since I'd read one of his books in this series and I needed the refresher. But when I'm three-quarters of the way through the book, I don't need to be reminded for the fourth time that Yossel Rosen is Flora Blackford's nephew or that Sergeant Michael Pound has been in the Army since the Great War. I know that already.

But while I was annoyed with those two things, it's not enough to keep me from reading the next book in the series. After all, I need to see who figures out how to make a uranium bomb first, the US or the Confederates. My money's on the US, but with Turtledove, you just never know.
Posted by John at 8:54 AM

Wow - cool, I should look abroad more. I started a plot once about what things would have been like in the US if the Confederates had won. This makes me curious, John. I'll have to look into it. You really do read a lot! Have you looked at Gilead yet?
Lisa Lickel