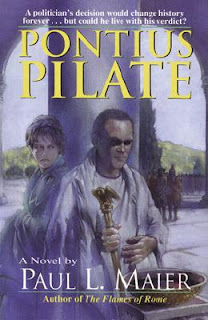 What a difference a few years make.

Pontius Pilate is one of the first Christian novels I ever read, maybe fourteen or fifteen years ago. It's an interesting concept: rather than writing a straight historical novel, Dr. Paul Maier (an eminent Biblical scholar and historian) set out to write a "documented historical novel." He set a few important rules for himself: use accurate names (if it isn't known, it's not given), no contradicting any known fact (even for the sake of dramatic license), and only using "constructed history" when he absolutely had no evidence one way or the other.

So Maier sets out to tell the story of Pontius Pilate, the Roman prefect who judged Jesus and sentenced Him to crucifixion. But Maier takes a long running start at the trial, explaining the climate of Tiberius's reign, what Pilate experienced as governor, and what he may have seen after his return to Rome. Maier shares his research in a series of extensive endnotes. According to the second edition preface, nothing discovered in recent years has contradicted anything in the book.

If you're looking for a great book to help illustrate the political and societal pressures Pilate faced while acting as the Roman representative in Judea. Where the book is weak is craft. There's a lot of telling, lots of info dumping to explain historical data. If you're looking for information, those things are fine.

In spite of this, it's a good book to read. Everyone should.
Posted by John at 11:20 PM