The facts are these... 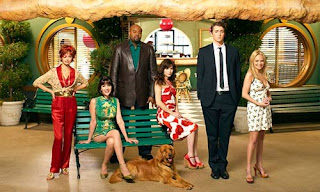 ... the Piemaker got the raw end of the deal. And so did we, the viewers.

Jill and I watched the final episode of Pushing Daisies tonight. I'm going to miss this quirky, well written show. Snappy dialogue, bizarre plots, and incredible sets. Every show was a delight.

But sadly, I think we deserved somewhat better.

What I mean is this: it's obvious what the producers of this show did. When they found out that they were getting the ax, they had only shot a season finale (complete with what I think would have been a terrific cliffhanger, sure to bring me back in the Fall). So they had to manufacture a series finale with a bit of a voiceover and some hastily thrown-together effects.

It didn't totally sit right with me. Maybe it's the fact that I'd rather see where the show would have gone past the cliffhanger. Maybe it's the rather ironic ending of "there-is-no-ending, just-new-beginnings" business. Whatever the case, it could have been handled a bit better.

Oh well. What's done is done. Now to gear up for the final episodes of Eli Stone and Kings.

Looks like my Fall TV viewing schedule is going to be a might empty.
Posted by John at 10:30 PM