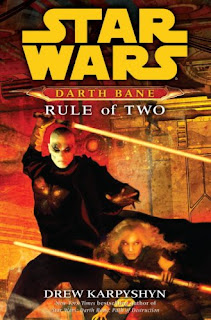 I know I've mentioned that I'm a Star Wars fan in the past. The interesting thing I've noticed over the past couple of years is that I've slowly lost interest in anything revolving around the two movie trilogies. I used to be an avid reader of the Star Wars novels, but after I finished the New Jedi Order series, I didn't really care what happened to Luke, Leia, Han, and the rest anymore. The same thing is true about the Clone Wars era. I can't be bothered. Yet the esoteric past of Star Wars, the vastly unexplored historical backstory of the Star Wars movies, well, sign me up for that!

Which brings me to this book, namely Darth Bane: Rule of Two by Drew Karpyshyn. This is a sequel to Darth Bane: Path of Destruction, a book I reviewed a little over two years ago. The story picks up where the previous book left off. Darth Bane and his newly acquired apprentice, Zannah, are trying to leave Ruusan in the wake of the war between the Jedi and the Sith. In the process of the story, Bane is encased by parasitic bugs that make him somewhat indistructible and he tries to figure out how to construct a Sith Holocron to preserve his teachings. Zannah, now technically Darth Zannah, goes along with her master's plans.

It didn't take me long to read this book, mostly because it's literary junk food. All filler and fun, no real heft to it. In some ways, the book wasn't all that good because the plot is kind of nebulous. What, exactly, is Bane trying to accomplish? We don't have the faintest clue. The characters too are a bit flimsy. At least with Sith Lords like Darth Sidious, we knew what he wanted. Galactic domination. That's a worthy goal of an evil Dark Sider, right? Yet Bane and Zannah's motivation is something of a mystery. Why did both of these peopel fall to the Dark Side? What are they trying to accomplish? Who knows.

I saw this afternoon that there will be a third Darth Bane novel. Maybe that will shed some light on what the "big picture" is for Bane and Zannah. If not, that's okay too. I'll still read it. Although, like with this one, I'll probably wait to get it from the library.
Posted by John at 3:48 PM