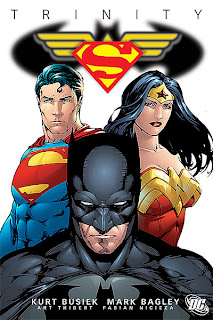 I actually heard about this book while I was doing my research on Failstate. Someone (and I don't remember who) pointed out that the DC universe has a trinity of heroes in Batman, Superman, and Wonder Woman and that someone finally decided to do a story acknowledging that. So when I spotted Trinity Volume One at my local soon-to-be-closed B. Dalton (so I could get it for half off), I snatched it up.

Basically the plot boils down to this: bad guys are trying to take over the world using a magic spell that somehow involves Superman, Batman, and Wonder Woman. Tarot cards feature heavily in the plot for unknown reasons. And just about every DC superhero is involved in some way, shape, or form. Oh, and so is some alternate universe where everyone is evil.

In all seriousness, I had fun reading this one. Granted, I don't know all the backstory in it, which is okay. I'm somewhat conversant in names, identities, powers, and so on thanks to the various animated series put out by Warner Brothers and DC. I know, that's probably heresy to fanboys. Well, deal with it. I still didn't know who everyone was, but that's okay, it didn't really matter in the long run.

The only thing that really torked me off is the fact that they kept making references to trinities of different sorts (mostly steeped in the occult and tarot) and they missed, well, the obvious one. You know? Big Three? One of them has a supposed birthday coming up in a day or two? grumble grumble grumble. I know from my reading that both DC and Marvel tend to avoid Christianity (for the most part; I know about Nightcrawler), but come on.

My only other complaint is one of my own making. I had thought that this was a self-contained volume. Nope. A quick check reveals there are two more volumes out there for me to read. And I doubt I'll be able to get them at a ridiculously discounted price. Better start saving my pennies now.
Posted by John at 10:42 PM