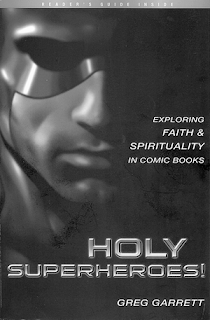 So I'm continuing my research for Failstate, and that brought me to Holy Superheroes! by Greg Garrett. In the interest of fairness, the Amazon link I've provided is to the new expanded edition of the book. I read a borrowed copy of the original edition. That being said, I'm not about to rush out and buy a new copy because in the end, this book left me largely disappointed.

I was actually kind of excited to read this one. Seeing as Failstate is going to be a superhero story with some major Christian underpinnings, I really wanted to see what Garrett had to say about how faith and comics intersect. The book was, granted, a bit on the light side, much lighter than some of the other books I've read on the subject, but I was hoping it'd be chock full of theological goodness.

I came away disappointed. The book is more pop psychology than theology. Dr. Martin Luther King Jr. is quoted more than Christ. Garrett even quoted himself (in a previous book on the Matrix trilogy) more than Christ. That should pretty much tell you what you need to know. But to get into more specifics, each chapter was superficial and shallow in how it treated its subject. Ultimately Garrett's book was more about social justice without any sort of grace-based foundation.

I might be too harsh on this, I don't know, but in the end, I wasn't impressed with Garrett's work.
Posted by John at 8:59 AM