For those unaware of what I'm talking about, let's review. I've been sharing my limited experience with writing, using a formula I made up:

Given what we've seen, what do you suppose the third "R" is?

Okay, okay, we'll call it reading, because that's usually the way we conduct research. Not the only way, of course, but certainly a way.

There's an old adage that writers toss around from time to time: write what you know. Some of the best fiction comes when the author writes about a subject that they're uniquely qualified to know and understand. And there's certainly some truth to that. When an author puts together a proposal for an editor or agent, one of the things they want to know is if said author has any special qualifications to write his or her book. For example, if someone is writing a hard sci-fi book about time travel, an actual theoretical physicist will have a better chance at getting noticed than, say, a Lutheran minister.

Not that I've written a book on time travel.

Anyway, that adage is all well and good, but it can also be a bit limiting. If all we're supposed to do is write what we know, that could turn out to be rather confining. Should I only write about people who are Lutheran ministers, since that's what I know? Should my only setting be the sinking of the RMS Titanic or the USS Enterprise D since I used to research those things a lot when I was younger?

C'mon. Like you couldn't have guessed that second one.

The answer is "No." While "write what you know" is a good adage, the reverse is equally true: know what you write. If you want to write about time travel and you're not a theoretical physicist, do the research and find out what you need to know.

The reason for this is simple: no matter how obscure the subject you're writing about, someone, somewhere, will read your story and know you don't know what you're talking about. It'll either be a minor glitch that momentarily leaves the reader scratching his or her head. Or it could be so major that they'll stop reading and vow never to read your stuff again.

Let me give you an example of what I'm talking about, but not one from the literary world (exactly). Let's talk Castle. 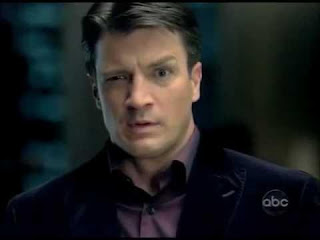 I love this show. It's simply awesome. Nathan Fillion, playing a writer? What's not to love? However, as great as the show is, it's obvious at times that the writers don't always do their research.

How do I know? Because of Lee Lofland and his blog, The Graveyard Shift. Lofland is a retired police office and every week, he posts a "review" of the episodes, pointing out where the show got the police procedures and research wrong.

Now one might argue that this is a TV show, one designed for entertainment and not education. At the same time, though, every now and then, the writers make a doozy that really, they should have done better.

I'm not saying that these research errors make me love this show even less. But it illustrates my point. Lofland knows better. And at times, his frustration over the mistakes is very obvious. In spite of them, though, Lofland keeps watching.

So when do you do the research, before, during, or after? That's up to you. Like I said last week, writing is about finding a method that works best for you. Some folks have to do extensive research before they put one word on the page. Others wait until after the first draft is done. Figure out what works best for you and stick with that.

Just make sure you do it. You don't want to lose any readers because you didn't do your legwork.
Posted by John at 8:00 AM