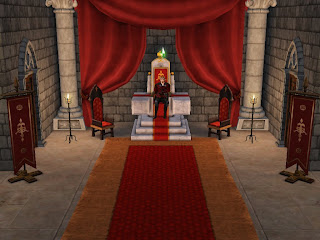 It's time for the Sims to get medieval.

Okay, so The Sims Medieval has been out for a while and, truth be told, it wasn't really on my radar. Part of that stems from the fact that I was a bit disappointed with The Sims 3: Late Night. Part of it was general ambivalence toward a stand alone Sims title. But my in-laws got me this for my birthday and, I have to say, I was pleasantly surprised, mostly because, while this is a Sims title, it has a completely different feel.

Basically the player controls "hero Sims." These heroes fulfill certain roles within a kingdom. Each time you found a kingdom, you start with a monarch, either male or female. Once the game is started, the player accepts quests that the heroes perform. Successfully completing the quests gives the player points, which he or she can use to invest in more heroes, buildings that benefit the kingdom, or to forge alliances with distant lands. Some of the quests get quite complicated, requiring the player to keep tabs on two (or possibly three, although I haven't encountered that yet) heroes at a time. 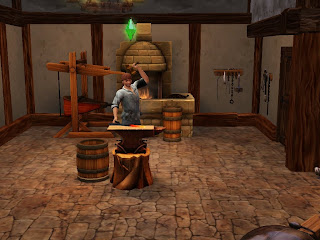 Further complicating the game are the heroes' responsibilities. Every "morning," each hero is given two or three tasks that they must complete. For example, the monarch might need to write two new laws. A blacksmith will be given orders to complete. The wizard must gather herbs for potions. That sort of thing. Failing to complete these responsibilities can negatively impact the hero and their progress on the quest.

On top of that, each game has an overall focus. For example, in my last game, I was charged with creating an empire, which meant I had to focus on annexing my neighbors. Oddly, the game ended before I could annex them all, meaning I only achieved a silver for that achievement. 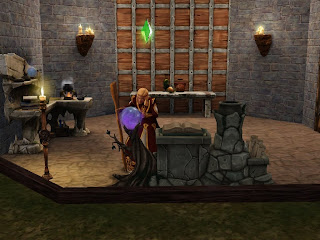 The game isn't as much of a sandbox as the other Sims games. The quests definitely drive the game, and that's both a help and a hindrance at the same time. On the one hand, it gives the game a definite forward feeling, a target to shoot for. But it also frustrated me on occasion. There was no way to get a feel for how a hero worked before I had to get them going on a quest. I still have no idea how the merchant profession works after playing through it twice. There were a few interactions I missed from previous Sims games, such as an "introduce" social. In my first game, I had noticed a young woman I wanted my king to marry, only he didn't know her, but another hero did. Try as I might, I couldn't get the king and my pick for him to cross paths and inviting them both over to see their mutual friend didn't help.

The one thing I think the game lacks is a quest editor. While there is a broad range of quests, I saw the same ones pop up in my two play-throughs. I suspect that, if I try to get all the achievements and see everything about the game, I'll see the same ones over and over and over. That will get old quickly. The game could benefit from an in-game quest editor, maybe something similar to what Maxis included in Spore: Galactic Adventures, a way for players to write their own quests and share them with each other. It's probably a pipe dream, but it would be cool and could add some variety to the game.

Something that surprised about this game was the rather adult nature of some of the themes. For example, in one quest, my bard had to . . . well . . . get intimate with someone to acquire inspiration for a grand work of art. Afterwards, she wound up both pregnant (not planned) and apparently with a social disease. No fooling. That really surprised me. 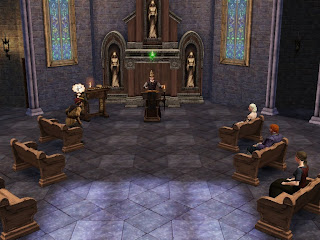 But what also kind of surprised me was the inclusion of religion in this game. Naturally, on my first play-through, I gravitated toward that immediately.

Basically, the Sims in this game can worship a deity named "the Watcher." Unsurprisingly, that's what the game calls the player. Anyway, there are two "flavors" to the Watcher religion, the Jacobians and the Peterans. The Jacobians seem pretty analogous to high church Catholics in the Middle Ages. The Peterans are more like monks. Both heroes from the different branches can pray, bless other Sims, and even give sermons. Sadly, my Jacobian priests keep getting booed, but seeing as they're rated on how much people fear them, I don't feel too bad about it.

All in all, this is a really fun game to play. While different from the other Sims games, it still retains the goofy humor that makes the franchise so much fun. While there are some things that are lacking that will limit its replayability, I suspect that there will be many kingdoms that will rise under my benevolent guidance.
Posted by John at 6:22 PM