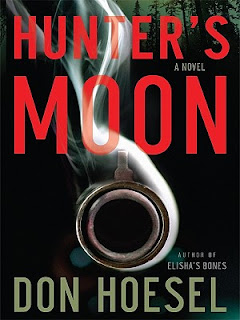 A number of months ago, I received a free copy of Hunter's Moon by Don Hoesel. It sat in my to-be-read pile that whole time until late last week, I decided that it was time to unearth it and see what it was all about.

Best-selling author CJ Baxter faces some serious problems in his life. His marriage is falling apart, his career is in jeopardy because of his hot temper, and now, his grandfather has passed away. CJ must return to his hometown of Adelia, New York, a place he hasn't visited since he left for college.

This trip stirs up even more problems. He hasn't been in contact with his family since leaving Adelia either and his brother, Graham, is running for the Senate and his campaign is in a bit of trouble due to familial crises. Worse for both CJ and Graham, returning to Adelia has brought back some painful old memories, one that will set the two brothers on a collision course.

I'm not quite sure what to make of this book. I suspect that Hoesel was going for a more literary feel, which is fine. As a result, the pace is almost glacial. It took close to a hundred pages before I got even a hint of what this book was about and what kind of trouble CJ had found for himself. Hoesel spent that time building backstory and exploring some of the characters' lives. There were a number of flashbacks, some amusing diversions, that sort of thing. The story doesn't really kick off until CJ travels from Tennessee to New York for his grandfather Sal's funeral.

Once the story got going, though, it felt a little choppy to me. In some ways, it almost felt like Hoesel had put different subplots on a Twister spinner and every now and then gave it a good spin. That would be the plot that would take center stage, almost to the exclusion of all others. That felt a bit odd, especially given how large some of the subplots were.

Not only that, but there were some hiccups in the plot as well. CJ investigates some shady dealings his brother is involved in, but rather than show us what CJ finds, Hoesel instead tells us, often jumping over needed data. There were many times when I was like, "When did he find out that?" It felt a little like a needle skipping over a record and would jostle me out of the story.

The ending didn't quite do it for me either. Some of the subplots got wrapped up a little too quickly. Others didn't seem to be resolved at all, left as dangling threads.

So when all is said and done, I wasn't all that impressed. The prose was well done. The craft was (mostly) top notch. But the hitches in the overall plot left me unsatisfied.
Posted by John at 7:15 AM