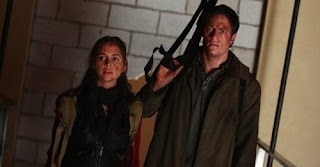 The good always die young. Wow. What a series finale!

Dollhouse ended tonight and I'm pretty upset about it. This was a phenomenal show almost from the beginning (almost). The premise was great, what with the imprinting of entire personalities that have been cobbled together from bits and pieces of other people. How would such technology impact the world? Here's a hint: not very well.

Sadly, both seasons of the show suffered from the same sloppy structure. Both seasons started with "engagement of the week" episodes, stand-alone stories that really didn't contribute much to the overall storyline. Then, halfway through each, the show delved into the deeper mythology of the Rossum Corporation and their nefarious designs for humanity. It's unfortunate that they (either the writers or the network) chose to do it that way. Rather than draw in viewers, I think the relatively lackluster stories drove them away.

For those of us who stuck around, though, Man on the Street in Season One and Belonging in Season Two were game-changers, dropping us head-first into a twisted story that was so engaging because it was so frighteningly possible. I'm not talking about the tech. I have no idea if you can imprint total personalities over someone or not. But the way Rossum used the tech is completely believable. Joss Whedon has a dim view of humanity's ability to resist such seductive power. I share it.

But let's talk about some of the twists, such as who the head of Rossum was or who died in the finale tonight. No worries, no spoilers, but wow. No sentimentality for anyone.

There was one thing that bothers me about the way everything played out. It would appear that the writers ret-conned the way Caroline became Echo. In the Season One episode Echoes, it would appear Caroline became Echo after a weird YouTube animal rights plot. In the Season Two episode Getting Closer, Caroline is a crusading terrorist out to topple Rossum for what they're going to do to people. In both episodes, each plot seemed to be her entrance into the Dollhouse. A contradiction? I have no idea.

It's a shame that this is over. I think they could have kept going and it would have been a wild ride along the way.

So what's next for Joss Whedon? I'm hoping for Dr. Horrible 2. But that's just me. I do know I'll be mourning Dollhouse's demise for a while. Too soon, too soon.
Posted by John at 9:59 PM