The Breath of God 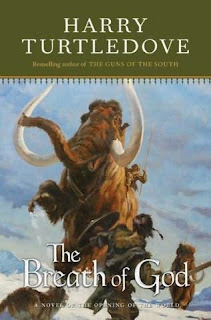 So, I guess, lesson learned. Don't expect great books at a liquidation sale. I just now finished the final book I bought at the B. Dalton clearance sale and, unfortunately, it would appear that there was a reason all of those books were sitting around.

I tried to save the best for last. I'm a big fan of Harry Turtledove. Or, at least, I used to be. So when I saw The Breath of God, I figured I couldn't go wrong. Half price, an author I usually (or used to) enjoy.

What I didn't realize at the time was that this was the second or possibly third book in a series. I'm a little miffed with Tor for completely concealing this fact from me. Nowhere on the book itself does it say that this is book two or three of four or whatever. It didn't help looking at the list of other books by Turtledove either since the publisher didn't group said books by series. When I first started reading the book, I assumed it was a stand-alone.

Needless to say, you can imagine my consternation when it became quite clear that I should already know most of the characters. Turtledove went over great chunks of backstory, so much that I realized I had missed at least one book, possibly two. The sheer amount of telling in the opening chapters, while necessary, was also boring. I almost stopped reading the book after the first fifty pages but my Germanic stubbornness kicked in and I decided I would make it through the whole book.

The story itself deals with Count Hamnet Thyssen. Apparently he and some friends have gone further north than anyone ever has, through a Gap in the Glacier, where they've discovered a great nation of people who call themselves the Rulers. The Rulers have great wizards and fight atop riding deer and mammoths. And now that they know the Glacier has the Gap in it, they're bound and determined to add to their territory. First they'll conquer the nomadic Bizogot, and then it's on to the Raumsdalian Empire. Thyssen and company must stop the Rulers, but that won't be easy since Thyssen isn't exactly on friendly terms with the Emperor.

Like I said, I had to force myself to read this whole book. Turtledove's writing was repetitive, so much so that it frustrated me to no end. Lots of pointless bickering, and the characters would resolve things by stating, "Tell me I'm wrong" or "I can't say you're wrong" or some variation thereof.

In short, I wasn't impressed. Maybe I'm wrong. Maybe it would have helped if I had read the first book or the first two books or however many I missed. But honestly, after slogging through this one, I have no desire to track down those skipped books.

Oh well. On to better things, books for which I paid full price.
Posted by John at 5:04 PM

I've fallen victim to the clearance book trap on numerous occasions, but then I've also run across a few winners, enough to keep me trying. Kinda like a gold panner who finds just enough color in the bottom of his pan to keep him sluicing for the big run of gold.

It's disappointing, though, when you find a book you just know has to be a winner, but it's an abject dud. Been there, too. It can sour a reader.