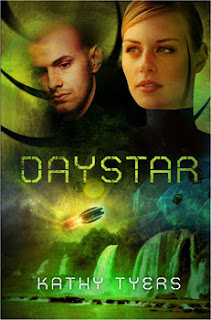 This is the end, my friends. The incredible journey that started with Firebird wraps up in Kathy Tyers' latest epic, Daystar. It's been a wild ride, so let's review:

The Firebird universe is one in which God's people were exiled from their home planet because of their illicit genetic engineering. They tried to make themselves gods by giving themselves telepathic and telekinetic abilities, to name a few. In the cataclysm that drove them from their world, the Eternal Speaker commanded them to protect the non-altered humans they found. And He also promised them that He would eventually send them a Savior through one particular family. Up until the last book, we've followed different members of that family as they try to struggle with the prophecies surrounding them.

But now the time has come. The long-promised Boh-Dabar has come. And he's come to a galaxy that desperately needs him. Non-altered humanity is turning against the Sentinels (the genetically altered people) and are threatening to wipe them out. Caught in the middle of this is Meris Cariole, a normal human who finds herself trapped on the Sentinel Sanctuary planet. She finds herself on stage for one of the greatest dramas ever. But will she see the truth that's speaking to her? Or will she hold on to her own selfish teachings.

This was a great read. I'll admit, I was a bit intimidated by the heft of the story. The book clocks in at a little over 600 pages, which had me worried. But once I got into the story, I was hooked. I had to find out what was going to happen next as evil forces conspired to destroy the Sentinels. I was particularly delighted to see the return of Firebird and Brennan. They were conspicuously absent from the previous book, Wind and Shadow, and I didn't realize how much I missed them until I saw them in this book.

I also loved the way that Tyers tied in so many little details from the previous four books, especially Wind and Shadow. That one didn't sit so well with me for some reason, but seeing how it tied into this one makes me want to go back and read it again.

I have two minor quibbles with the story, and they are minor. First of all, there were a few problems with predictability. This is basically a retelling of Jesus' story but on a galactic scale. As a result, I saw a few things coming. That's not necessarily a bad thing per se, but there you go.

The other was the odd way that the book ended. I mean, I get it, but I was surprised at how . . . compressed? . . . everything turned out to be. I get the reason why, it just struck me as odd.

But this is a great book. I know I'll have to pull out the Firebird books again and reread them all in the future. In some ways, though, it's sad that the journey is over. It would have been fun to keep traveling in this fabulous universe.
Posted by John at 1:26 PM