I've been waiting for this one for a long time. A long time. I'm talking about Wind and Shadow by Kathy Tyers.

True confession time: Tyers is the reason why I stuck with writing Christian speculative fiction. I still remember browsing the CBD website for Christian sci-fi (back before the Web 2.0 revolution) and stumbling across her Firebird books. And I remember staring at her name, thinking, Why is that name so familiar? And then I looked up at my Star Wars books and saw The Truce at Bakura and I knew I had to get Firebird. And I did, and it was awesome, and that inspired me to keep working on my own books and I . . .

Seriously, I loved Firebird. Those three books were a lot of fun and after reading them the first time, I kept hoping that some day, Tyers would return to that universe. That day has come. 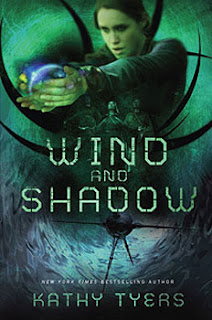 Wind and Shadow follows the children of Firebird's man characters. Kiel Caldwell has become a priest, Kinnor a Sentinel like his father. Kiel is called to the barren world of Mikuhr, the former home of the Sentinels' enemies, the Shuhr, by a diplomat named Wind Haworth. But as soon as he steps off the ship, Kiel disappears.

I really enjoyed this book. I did. Tyers has a flair for creating rich worlds and layering in some great sci-fi details. The characters are great. The action is top-notch.

But here's the thing (and I hesitate to say this, because I think it's more my fault than anything else). I felt a little lost in the early going. I don't know why that is. I got what was going on, for the most part, but every now and then, I got the feeling that I was missing something important, that while all of the pieces seemed to fit together, I was overlooking something.

I don't quite know how to explain it. That sense of "missing pieces" dragged on my enjoyment just a little in the earliest chapters. But once I got past that, I had a blast.

Like I said, it's probably just me. Life has been a bit crazy today and I can't say that I've been able to read as much as I like to with as much focus as I normally would bring to bear on a book. But if you're a fan of Christian sci-fi, be sure to check this one out. Totally worth it!
Posted by John at 10:00 AM