Stick a fork in Hive. It's done.

Well, not really. True, earlier this week, I finished the first draft of this monster project. The final wordcount for the first go-round? 85,504 words, which isn't all that bad, considering I set my goal at 80k when I started this . . . geez, when did I start this one? Hang on a sec.

Back in February, apparently. That actually isn't as bad as I thought it'd be.

In some ways, this has been a weird journey. Rather than pouring onto the page, this one was created in fits and starts. I seem to have taken Lent off, then took a two or three month hiatus after our second son joined our family (writers can claim paternity leave, right?).

But back to the wordcount. I'm actually impressed that I brought this one in so close to target. Granted, that total is going to fluctuate. The introduction I wrote back in February is getting axed. One of the main characters is going to be introduced earlier in the book, which means I have to add some extra stuff somewhere. And the ending, while bringing everything to a close, totally stinks. I mean, no symmetry, weak resolution, it's just "blah."

Funny thing is, I seem to recall I said the same thing about a certain other manuscript I finished about a year and a half ago. And look how that one wound up. So while I'm a little daunted at the prospect of wading back into Hive, I know I can make it better.

So what's next for me? Well, Hive goes up on a shelf for now. I've learned this the hard way: I need emotional and intellectual distance from my writing projects to do a better job editing when the time comes. In the meantime, I might take a crack at a short story that's been rattling around in the ol' brain pan for close to a year now. I mean, I've had this Post-It note: 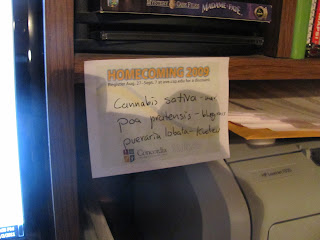 . . . stuck to my desk for who knows how long, waiting for the day when I could finally use this information in said short story. Maybe now's the time to do so.

I've also begun the "pre-writing" a new novel. Won't say anything more about it for now. Yes, it's kind of secret. Maybe I'll be able to explain more about it in the future. Probably. Most likely. For now, though, consider it Project X. Only without Matthew Broderick. Or Helen Hunt. Or the monkeys.