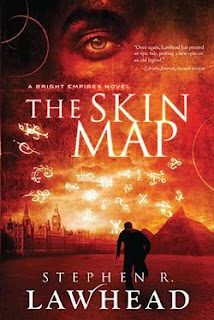 I was a little nervous about this one. See, I knew we were going to be covering The Skin Map by Stephen Lawhead for this blog tour. I had requested a free reviewers copy from the publisher but I hadn't seen one yet. By my reckoning, the blog tour was going to get started soon and I hadn't read the book. And then, finally, the book arrived, a scant four days before the tour was scheduled to start. I panicked. My schedule was packed as it was. How was I going to read a 400-page tome in four days?

Well, it turns out I needn't have worried. Many tourists were in the same boat as me and so, our blog tour got pushed back by a week. But here's the ironic thing: this book was good enough, I could have easily devoured it in four days. Less than that, even. Lawhead has crafted a fun adventure that kept me turning pages.

Kit Livingstone is an ordinary guy from London setting out on an ordinary day when his life takes an unexpected turn. As he tries to take a shortcut through Stane Way, he runs into his great-grandfather, a man who supposedly walked out on his family close to a century earlier. Great-Grandpa Cosimo informs Kit that he's inherited the ability to travel to different dimensional realities via ley lines. Cosimo invites Kit to come along with him on a quest to find the titular Skin Map, a diagram of the intersecting universes tattooed on one of the earliest ley explorers.

But Kit and Cosimo aren't the only ones looking for the Skin Map. And ultimately, the Skin Map isn't the real prize. There's a greater treasure waiting to be discovered.

Like I said, I really enjoyed this book. In some ways, it reminded me of a Neil Gaiman story. It has that kind of wit coupled with the same kind of esoteric subject matter. Kit and his girlfriend Mina are great characters and I was rooting for them the whole time. It's easy to see that Lawhead spent a great deal of time researching his settings and they positively came to life for me on the page.

The plot itself is a bit winding and, at times, a little hard to follow. One character in particular kept popping up everywhere, enough so that I began to wonder if it was the same individual or copies from alternate realities. There also seemed to be a time-bending nature to some of the story; I honestly don't know if the story was told in a linear fashion or more of a "hop to this time, hop to that time" way. My only real gripe is that Lawhead's excursion to Egypt seemed tacked on. At least, at first. He tied it in nicely at the end, but when I was reading it originally, I couldn't figure out why Egyptian archaeology was included. Maybe it's just me.

In terms of faith content, this is definitely what I'd call "tiller fiction" in the spectrum of Christian fiction. While God is mentioned, it's usually in passing and not in any truly discernible Christian fashion. It's clear from his other works that Lawhead writes from a Christian worldview and I'm sure that worldview will continue to assert itself in future books.

All in all, it was a great book and I'm looking forward to the next in the series. Check out what the other tourists have to say:

I really enjoyed this book too, and read it in one sitting.

Four days? That's a tough assignment! Good job getting it all read in that time *and* writing such a great review!

I bought mine back in September, and then found another copy as part of the "Skin Map" national treasure hunt. Anyway, I'm giving away one of the copies --- signed by Lawhead! So help spread the word...